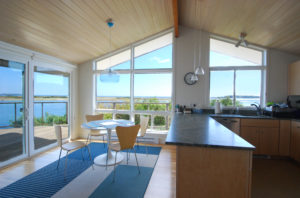 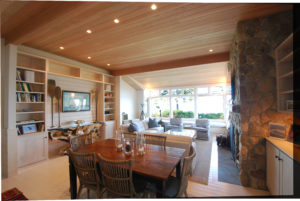 Nothing says “mid-century modern” as clearly as a deck house. Carefully engineered by architects according to the philosophy popularized by Walter Gropius in the 1950s, they have clean lines, large expanses of glass, deep overhangs, and extremely efficient plans approaching the ideal of the house as a machines for living. Deck houses and Tech-built houses came in a kit of parts that was quick to build and economical. Today, their promise of a new way of living is a bit tarnished. The houses were not only minimalist in appearance, but also minimal in many of the features that we consider essential today. Most were built with fixed single pane windows, little or no insulation, lightweight studs and headers, and no frost walls. Spaces inside are tight. How do you bring them up to today’s standards?

The owners of the first one are totally into the mid-century style. We added two bedrooms and a bathroom with the same outside appearance as the original house. Hidden behind the wide overhangs and low pitched roofs are thicker insulated walls and ceilings and higher plates that allow storm doors to open outwards without hitting the eaves. We opened up the plan, replacing a large brick fireplace with an efficient Danish wood stove. We replaced wood single pane windows with operable insulated fiberglass windows that were in some places larger than the original. Where wall heights did not allow room for wood headers, we used steel. All of the original portion of the house was sprayed with high density foam, both for thermal performance and to discourage the many rodents that had moved into the cavities from coming back. A lot of the renovation work is hidden.

The most important aspect of the visible part is the view. The plan is now more open to it on all sides. The kitchen and built-in cabinetry in the living area are strictly mid-century – sleek and without trim. We made room for a laundry, a powder room, and gear storage area that were missing in the original house. We added electrically operated skylights to vent summer heat build-up and active solar panels to provide electricity without battery storage. The interior decor is still evolving, carefully, with a keen eye for the best of the mid-century aesthetic. For more images of this house, visit River House.

The second house took an almost opposite approach. A portion of it had exposed wood framing, pine ceilings, a stone fireplace and a camp-like feel. The main living area was in an addition that had been added in the mid 1980s, in a style of that era. So even though it was Tech Built, the house was not pure mid-century to begin with. The owners like the campy feel of the original structure and wanted an inclusive, rich palette for the renovation of the 1980s wing.

As in the first house, the view is dominant. We raised the roof with two shed dormers on the ocean side in order to gain larger windows. Under the new windows, along two living room walls, we added window seats; on the other walls we added cabinets and shelves. The seating arrangement was turned around to focus on a new stone fireplace and a more prominent view of the ocean. Dining was moved from a separate dining room to the living area. The kitchen was opened up and updated; the master bathroom was expanded to include a tub, tile shower, and sauna. The house now offers two experiences: the original mid-60s building retains its simple open stud aesthetic, while the newer wing offers a rich palette of finishes and a variety of places to settle among treasured objects. For more images of this house, visit Deck House Renovation.